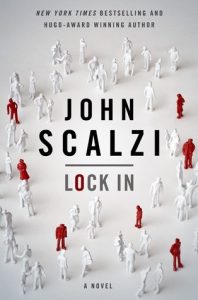 John Scalzi is a science fiction author of skill and renown, and I loved his Star Trek-inspired satire Redshirts and his Old Man’s War series, set in space and featuring cloning technology and brain transplants.

Lock In also deals with the brain, but in this case it is more that, rather than be transplanted, the human brains of victims suffering from Lock In — kind of like, catatonic paralysis, brought on by a worldwide infection — are synced with synthetic units, allowing them to move around freely, or even with other people, called integrators, who can allow the locked in to borrow their bodies for a time.

When Chris Shane, rookie FBI agent and Lock In’s poster child, is called in on a murder investigation, he and his partner begin to unravel a conspiracy that threatens the autonomy of all the Locked In, especially those who have chosen to live their lives in the virtual hub of (think Snowcrash, or Ready Player One, or even San Junipero from that single heartwarming episode of Black Mirror). The novel deals with classism and prejudice as much as it does the police proceduralness of it all, and it is fascinating and compelling and thought-provoking from beginning to end.

Another triumph for Scalzi, who continues to dazzle with every new release.