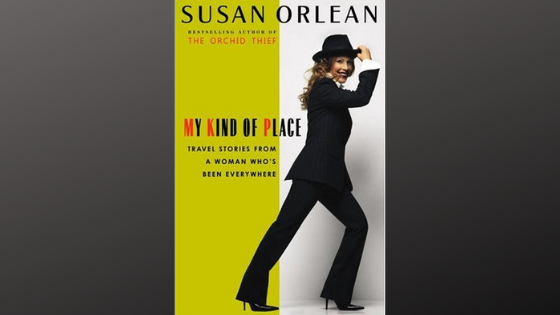 One of the best books I read in 2018 was The Library Book by Susan Orlean. It’s an astonishing achievement, all about a 1980s fire in an LA public library and the investigation into it, but also about the establishment of that library, and what we love about libraries, and books, and community. It’s hilarious, it’s thrilling, it’s thought-provoking, it’s sad. It’s just wonderful and I cannot recommend it highly enough.

Imagine my delight, then, when I was going through my plentiful unread books, and in the Travel Narrative section (yes, my TBR is separated into sections, isn’t yours?) I came upon this novel by Susan Orlean. I remember buying it, too. I went through a flurry of travel narrative purchasing, a few years back, having read all of the books then-written by Bill Bryson, Peter Moore, Tim Moore and Brian Thacker, and wanting to discover another shining voice in the field. Also, I had decided to settle back in Melbourne at that point, after having lived overseas on-and-off for over ten years, and so armchair travel had become my vicarious paths not taken outlet.

But, as so often happens, I bought too many books. And then they languished on my shelves as I bought and read yet others.

This one is a treat, and while not exactly covering the “everywhere” the title suggests, it is a very satisfying collection of Orleans’s journalism from across the late-90s and early 2000s, with dispatches mostly from America, but also from Thailand, Bhutan and a trip to Iceland to visit Keiko, star of Free Willy on his way to being freed.

There is much to learn in here, as in all the best non-fiction: I did not know about Midway, Texas, home to the Bush family, nor the origins of Khao San Road in Bangkok, though I have of course been there.

And I had never heard of Thomas Kinkade, 90s painter of renown and extreme commercialism. (I have definitely seen some of his paintings before, however. I’m pretty sure some of my friends’ mothers have put place mats with those images in front of me more than once. And for sure I have seen them in hotels.) He’s the Steve Parrish of oil painted landscapes — or was, he died young in 2012, at the age of just 54 — and he had the gall to not only call himself the “Painter of Light” and trademark the phrase, even though the Painter of Light is obviously Turner. Gotta admire the guy’s hubris. Apparently, at his peak, there was a Kinkade reprint in at least one in every twenty American homes. He’s fascinating, and Orleans, as she does with every subject of her interest in this collection, gets the very most of out his story.

Orleans’s style is conversational but in depth, she is objective when needful but also injects her own opinions and personality into every piece. “Homewrecker”, about the time Tina Turner didn’t come to stay at her apartment, made me laugh out loud. Reading this book was both an education and a pleasure, and those two things do not always go together.

I really wish I hadn’t looked up what happened to Keiko the Free Willy whale after her story on him, however.