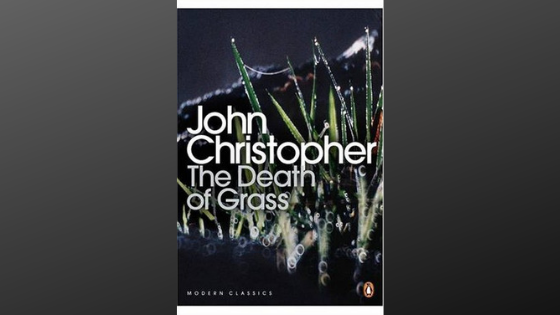 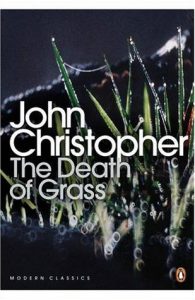 The White Mountains was my first introduction to a dystopian world. I read it when I was twelve, then read the two sequels in quick succession. One day, three books, aliens vanquished, and my eyes newly opened to the possibilities of science fiction. As a YA novel, it is pretty brutal, but still reigns in the worst possibilities of people desperate for survival.

The Death of Grass — aimed at adults — pulls no such punches.

A blight is affecting the world’s grass, killing off not only lawns but also wheat and barley and even corn. As a food shortage threatens and the trouble that first hit China heads towards the West, the comfortable people of England hear the news of frantic, murderous exoduses and the deaths of two hundred million people, and are still chatting about tea and football.

But then the blight hits England.

People are the worst. Literally a day after the Chun-Li virus hits the UK, the Government plans to bomb the cities to reduce the soon to be hungry population. At the same time, John Custance and his wife Anne head out of London with their best friends Roger and Olivia, assorted kids and diabolical gun shop owner Pirrie, along with his wife Millicent, bound for John’s brother’s distant valley farm, which he is sure will be safe.

Within a week, groups of men rove the country gang raping and pillaging, life becomes cheap and young girls are given into “marriage” to killers, while all compassion and decency is considered a luxury. Everyone looks out for only themselves and their families, stealing and torturing and allowing others to perform the most heinous acts if it might advance their own chances of survival.

This is a truly horrid book. Oh, it’s remarkable, and brilliant, and utterly enthralling. But the veneer of civilization falls away so damn fast, and the rise of tyranny happens so abruptly, and the women are such targets, and the people are so cruel, it is just a horrible, horrible vision of the end of everything and make it clear that humanity just does not deserve to survive.

It’s awful. It’s probably true. I hated this book. It is a masterpiece.

TBR DAY 83: The Death of Grass by John Christopher
GENRE: Apocalypse, Post-Apocalypse
PUBLISHED: 1956
TIME ON THE TBR: ~ 8 years.
PURCHASED FROM: Op shop.
KEEP: I don’t think so. It just makes me uncomfortable to even look at it right now.